That's What You're Reading?

My niece showed me the book she’s currently reading.  She likes the new Young Adult novels.  I was ready to say “Really?  That’s nice” to her, since many of the new books aren’t what you would call quality literature and I’m not terribly impressed.  I know that the Percy Jackson series teaches something of Greek Mythology, but what exactly are we learning from Eduard and Bella?  Hunger Games was at least tolerable and the Harry Potter series has good characters.  But stories that make you think?  That you have to actually concentrate on?  The Star Wars novels are entertaining, and come closer than some to getting out of the shallow end.
So I looked at her book and all that came out was “That’s Orson Scott Card.”  She said, “Yeah, Ender’s Game.  It’s this new series and they’re making a movie out of it.”  Of course they are.  Hollywood makes a movie out of everything.  All I could say was “that’s not new.”  Inside I’m cheering, cartwheels and everything.
I’m one of those who never watches the movie first.  I’ve usually read the book even before Hollywood gets a hold of it—except Nicholas Sparks.  I can’t say I’m a chicklit reader or watcher.  Sometimes I don’t even watch the movie because I know the screenwriters are going to mess it up. Two hours on the screen just can’t capture the depth of the written narrative.  Even Game of Thrones doesn’t tell everything George R.R. Martin is trying to share and HBO has had a few seasons for it.
And they aren’t supposed to. You thought this was to criticize movies, right?  Wrong.  I’m watching The Two Towers—again—as I write this.  I’ve read the Lord of the Rings trilogy, and the Hobbit, and Simarillion.   The movie series did disappoint me until I said “hey, this isn’t the book.  It’s okay if Legolas is reduced to a pretty boy with a petty feud with a dwarf. It’s just a movie.”  Screenplays aren’t novels and novels aren’t screenplays.
But if a movie directs someone to a novel, how cool is that?  I have to admit, the Sharpe Series was like that for me.  I saw it on PBS back in the day and not only fell in love with swashbuckling action, but also began a life-long obsession.   In retrospect, there isn’t much depth, just lots of Sean, in the movies but it opened me up to something different than scifi and fantasy.  Whether in novels or on the screen, that’s good story telling.
I’m going to watch Ender’s Game with my niece in November.  I’m going to be disappointed because that’s just the way it goes.  But, I’m also going to say but they’ve picked a story to peak her interest. She’ll go back and look for more at the library.  And then she’ll ask the librarian for similar things.  She’ll read Margaret Weis, Madeline l’Engle, Piers Anthony, Terry Brooks, and others.  She’ll want more from her novels than she’s been getting and be more discerning in her movie viewing.  And she will still be able to enjoy them all.
You don’t start a baby off on meat and potatoes.  You give them baby food first, let them learn to digest it, then as they grow their palates become more sophisticated, not only able to handle better, but actually wanting it.  That’s the way it is with good story telling.  We start them small and then expand their horizons.
Hopefully there’s not a lot of abuse and neglect along the way.

Celebrate Friday! It's Been A While 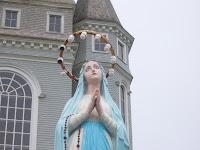 CELEBRATION FRIDAY!
My celebrate is that I'm back on this site.
I always have big plans, but then life happens....
So, in the interim, I haven't slacked.  Wrote some poems, took some pictures, worked on the elusive novel.  Went to Nova Scotia to dig up some family roots.  Very fun.  I want to do some posts about this.
Will try to be more blog productive, but who knows?
Posted by Bethie at 11:11 PM No comments: