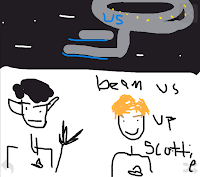 "The patient's not breathing!"
"Keep bagging! I'm almost done.  I've only got five minutes to post M before Midnight."
"Start CPR!"
"I've already done C.  P and R? Not sure what they'll be yet."
"Here's the patient's X-ray."
"X-ray?  I was thinking maybe Xanadu--the Rush version, Not ONJ"

May 1 has come, the challenge has been met, the patient saved, and congratulatory tankards of ale all around...or in my case, mugs of of double espresso.
This was my second year to participate in the A to Z Challenge. Last year I did a theme--some nerdy professional thing. This year I had a theme--Random Variety.  A fancy way of saying I had no clue.  It was actually more fun this way.  I did manage to post all the days on time.  Whew!  Even with all those pesky sick kids demanding attention--what's with all this illness anyway?   However, as with last year I didn't get  to visit as many blogs as I'd hoped.  I don't know how to remedy this problem, unless I can in some way alter the time-space continuum.  But, I did learn more about comic books and Star Trek than I ever thought my brain could hold. 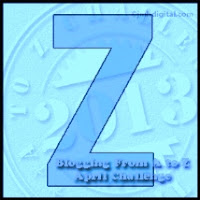 In one month I talked about Garden Gnomes, wrote some poems, discovered a deadly muse and  the Plague (which almost killed Sean Bean).  Told a story about a Ninja, Reviewed a Reading, Big Fish, and Travis.  I interviewed a baby twice, looked at serial killers and their victims.  After visiting Wahoo it got a little Queer, but in the end I realized Y I like Z the best of all letters.
I won an award along the way, but what really counts is all who participated and finished are winners in need of medication and a vacation.

So, on another note:  I found this other Challenge.  It's VikLit's Writing Blog. Basically each Friday you post celebrating little things you accomplished that week.  Such as I breathed air or I didn't strangle my boss. (those might be considered big.  I love air and my boss, by the way)

Three Celebrations for me:
Celebrating anything this week?
Posted by Bethie at 9:42 PM

Email ThisBlogThis!Share to TwitterShare to FacebookShare to Pinterest
Labels: A to Z, challenge, insanity, reflections