Garden Gnome: A Study in Green 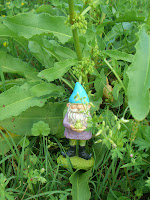 Green goblets filled with absinthe should’ve been his first clue.  Green plates held gorditas topped with guacamole and salsa verde—certainly not gourmet fare.   Pale green walls were accented by lime curtains.  It was a study in green.  But Geoff wasn’t engrossed with the décor.
His friends warned him.  Something wasn’t right about her.  Geoff was listening to the Green Fairy talking from the goblet, not the gorgeous young girl twirling before him, emerald georgette flaring, hinting of what wasn't visible.  They said he wasn’t thinking straight, but Geoff knew better.  Shamrock was his shade of green.  Envy was theirs.

The shades in her room accented hypnotizing jade drowning pools that gazed through him.   “How does your garden grow?”  Geoff thought out loud.  Her responding laugh was smooth glass shattering any more thoughts in his brain and he dove in without hesitation.
It was foolish to think he was the one ravishing her.  He thought himself still in his prime, but she was insatiable.  Even when he was spent she took her pleasures.  His last thought before restless slumber was maybe his friends had been right. 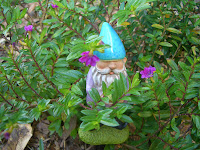 He awoke to the Green Fairy attempting escape by driving a hole through his skull.  Why had she been so accommodating last night only to turn on him now?  Cool breeze and the smell of gardenias made Geoff realize he was no longer indoors but in a garden.  His vision came into focus though he didn’t remember opening his eyes.   His limbs were stiff—no immobile.  He couldn’t blink or turn his head.  What was happening? Something rustled and then green eyes came into view, grotesque now as they looked at him with contempt. 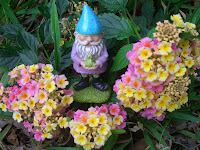 “They say having a garden gnome brings good luck.  One can only hope you’re luckier now than you thought you were last night, you little gnome of a man.”
Geoff’s screams went unheard as gnats flitted around his head.